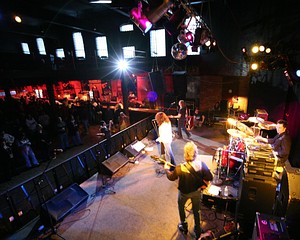 Originally called "The Country Warehouse" when it opened in 1978, the Water Street Music Hall went through several name changes throughout the years, until finally in 1991 it received its current name1.

The Water Street Music Hall was one of Rochester's largest venues for live musicâit held about 800 people. It also had a smaller venue next door called The Club at Water Street. The Club held about 250 people, and housed smaller shows. Occasionally large events were held on both sides.

Many famous and diverse acts have played at the Hall, including

Rancid, just to name a few2.

The venue closed in January 2017. In February it was announced the venue was going to become a Funk N Waffles.

Ska is Dead Tour here had to be about three years ago. Pretty nice place. —JohnJoseph

2008-01-17 15:12:17   Club failed to notify patrons that artist cancelled show and took money at the door anyway. A sign would have been nice, but $18/piece for
unsuspecting patrons is nicer for the club. Thanks a lot. —PersonFace

2009-05-12 13:30:35   Went here last week for a concert. The floor was caving in, and they had to move the concert and do it with no sound equipment. Didn't offer refunds to anyone, even though their facility falling apart caused the concert to really not even happen. —goldengirl217