The Town of Webster has evolved from berry and fruit farms tended by German immigrants to an upper-middle class suburb and the home of much of Xerox's manufacturing operation. Its housing stock has grown dramatically since 1990 and has experienced substantial retail development along the Route 104 and Route 404 corridors.

Chamber of Commerce, and the

Viewers may refer to Webster based on the Webster Central School District, which covers all of Webster, plus portions of the Town of Penfield.

Webster is home to Webster Park, an enormous plot of land (550 acres) that includes a pier for fishing and strolling along, several enclosed lodges, a baseball diamond and multiple tennis courts. There is also the Webster Aquatic Center and Webster Field House. In 2004 Webster was named the "Number 1 Sportstown in New York" by Sports Illustrated, based on the work of the Webster Community Partnership.

See Restaurants/Areas for places to eat. 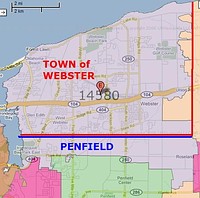 Some people may think of Webster as the 14580 zip code (shown in light violet in the graphic 1 to the right), which includes most of the Town of Webster, outlined by the red lines on the graphic. However, the 14580 Zip Code extends well into Penfield, with many Penfield businesses having Webster mailing addresses. This is especially confusing for the many businesses in and aroundBaytown Plaza on Empire Boulevard.

Some Webster residences in areas to the east will have the Ontario zip code mailing addresses.