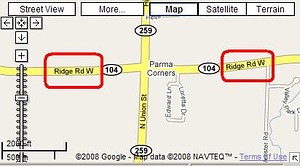 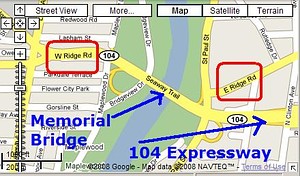 West Ridge Road is divided from East Ridge Road by the Genesee River and the Veterans Memorial Bridge. West Ridge passes through the Maplewood neighborhood and intersects with Ridgeway Avenue, Lake Avenue, and Dewey Avenue. Despite being in the city, West Ridge is very much a suburban commercial strip in terms of character.

Starbucks, Olive Garden, Famous Dave's, and The Distillery are all located right off West Ridge Road near 390. Men's Wearhouse is on Osgood Drive near the mall. Elm Ridge Center plaza is near Ridgemont Country Club

West Ridge enters Spencerport at Manitou Road and becomes increasingly rural. Hilton Parma Road is the other major intersection, and the road also passes over Northrup Creek, Black Creek, and Buttonwood Creek. Also note that once in Spencerport, locations along West Ridge cease to have a Rochester address.