In 2004 the Fast Ferry, nicknamed The Breeze, began daily service between the ports of Toronto and Rochester. In September 2004 the ferry abruptly stop running when it became public that the ferry's operating company (

Canadian American Transportation Systems) owed hundreds of thousands of dollars in fuel fees and did not have the funds to pay for it. The city of Rochester, having already invested millions of dollars into the project, bought the ferry from its other investors during a foreclosure auction in Febuary 2005. The ferry resumed service on June 30, 2005 as The Cat, managed by

The ferry featured two movie theater rooms, a restaurant, two bars, wireless internet access, duty free shopping, and a children's play area. Fares start at $29 for an off-peak one-way walk-on ticket, plus a $5 passenger annoyance fee. A summer walk-on round trip was $74/person, which is quite competitive compared to Amtrak or Greyhound.

In January 2006, newly elected mayor, Bob Duffy cancelled city support for the ferry. Despite the fact that the Ferry service was not designed to make a profit in the first 2-3 years, in the first year of operation the Ferry racked up much more debt than expected, and problems with mis-managment by

Canadian American Transportation Systems undermined support for the project. The Ferry was sold to a UK company May 3, 2006 for $29.8 million. 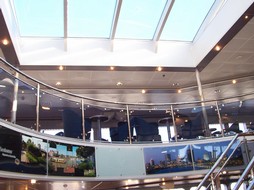 The Atrium aboard the vessel. Persons caught going up the steps to the Business Class area without authorization best know how to swim.

Spirit of Ontario I (her official name) had a top speed of 55 miles per hour. The port to port travel time was about 2 hours and 15 minutes.

The Rochester ferry terminal was located at the Port of Rochester, which is easily accessible by going north from the eastern terminus of the Lake Ontario State Parkway. It's serviced by bus route 1 (Lake Avenue). The bus schedule was almost (but not entirely) incompatible with the ferry schedule. The terminal has an assortment of quick-service restaurants such as Quizno's, California Rollin', the Nutty Bavarian, a coffee shop and Abbott's.

The Toronto ferry terminal was located at approximately

1 Unwin Avenue, at the south end of Cherry Street. You can get there via TTC bus 172 (Cherry Street), from Union Station. If you're driving or walking, there is a Loblaw's grocery store at

10 Lower Jarvis St, which was a good place to pick up water, food, or coffee for the ferry trip to Rochester.

Following the collapse of the ferry service and its subsequent sale, the New York State Comptroller's Office audited the ferry and its finances (by request of Assemblymen Brian Kolb and Joseph Errigo). The audit report was issued

here in PDF). The report is sharply critical of the handling of the ferry, accusing the city of ignoring warning signs from the beginning and inadequately protecting the city from financial problems.

In order to avoid being docked all winter in Rochester, the ferry left the terminal during the evening of December 21, 2006 to beat the closing of the St. Lawrence Sea Way. The ship was dry docked in Nova Scotia to repair yet another crack in the hull and wait for the sale to EuroFerries to be completed.

In 2007, the ferry terminal building on the Canadian site was used as the location of a new CBC detective series called "The Border" (starts Jan 7th, 2008).

In 2008, the Fast Ferry was voted "Best Misuse of Public Funds" in City Newspaper's 'Best Of' Awards.1

As of fall 2011, the ferry is now operated by FRS between Tangier and Tarifa across the strait of Gibraltar.2

In 2011 there was a proposal for a new ferry by businessman Harper Sibley, a millionaire descendant of Rochester's own Hiram Sibley, the founder of Western Union (no relation to the department store). This plan, which would've used entirely private funds, would have included either two smaller ferries or one smaller ferry with a capacity of about 150 passengers during Summer peak months. After pursuing the idea for over a year, Sibley abandoned the venture in mid 2012, citing the inability for find the proper boat.

As of 2015, there have been no future proposals to revive the ferry.