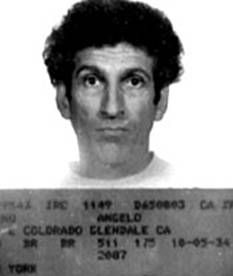 Angelo Buono Jr., along with his adoptive cousin Kenneth Bianchi were the Hillside Stranglers in 1977 and '78, taunting Los Angeles police by leaving their victims' sexually assaulted, nude bodies in grotesque poses. The victims ranged in age from 12 to 28, and the case spawned documentaries, a book and a made-for-television movie.

Investigators finally cracked the case when Bianchi, looking to escape the death penalty, implicated his cousin after having been arrested in Bellingham, Wash., in 1979 in connection with another rape/strangulation case.

Buono, who worked in an auto upholstery shop in which most of the victims were killed, was convicted in 1981 after a 23-month trial of nine of the 10 documented killings. He died of natural causes in California's Calipatria State Prison in September 2002. He reportedly got married in 1986 while imprisoned.

Buono was born in Rochester Oct. 5, 1934 and moved to California with his family before the age of 10.

Bianchi, who left the Rochester area for California in 1975, pleaded guilty to five of the California murders and was sentenced to 118 1/2 years in a Washington prison — he must serve nearly 80 years before he's eligible for parole — for his role in two other murders.