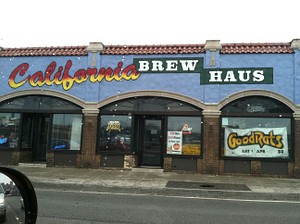 California Brew Haus is a restaurant and brewpub. It features over a dozen draft beers, as well as a selection of hundreds of bottled beers.

As of April 2008, a regular Monday night event offers beer specials (such as $6 pitchers) and had free pizza which was delivered from

Carmine's at approximately 9:30 to 10:30PM. The weekly event was targeted for Monday Night Football, but it was held even outside of football season. The Pizza night was discontinued early in 2009. There is still plenty of beer - and as of March 2010 - Killian's on tap for $1.25 a glass, and there are cheaper beers too.

The restaurant also offers free Wi-Fi to customers only (protected via WPA encryption).

As of March 2010, includes
The Sopranos pinball, The Simpsons pinball, and Big Buck Hunter, Power Putt. Orien, an electronic game machine or 2 on the bar, and a Dart Board machine. 2 Pool Tables.


2007-07-01 23:05:01   Live music several times a month, 2 Pool Tables, 3 Pinball machines, video games, large Variety of Bottled and Tap Beer and other drinks. There is an admission fee for nights with live music in the large party room. Food available, some specials. Lots of Parking in back.—JackGreenky

Info Added 2007-12-03, updated April 2008
Pinball Answer: Star Trek Next Generation, Monopoly, and The Sopranos, as well as a Golf Game Video Machine, and another freestanding video shooting game and more, plus 2 video game machines on the bar —JackGreenky

2009-02-04 12:01:03   Why don't you remodel the outside of the brew haus? Dude, have you heard of a thing called money.
Back in the day the brew haus had a lot more money from the Kodak workers who came in for lunch.
There are no more Kodak workers.
Come in and spend money if you want to see the place get better. —horsescorse