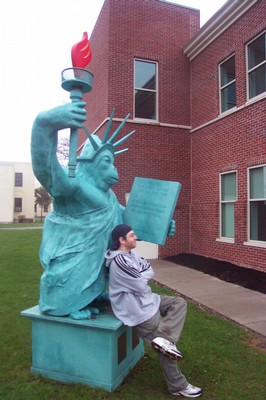 *As of May 2009 the Epileptic Gorilla is missing.

A bizarre 10 foot statue of a gorilla stands within the compound of the Al Sigl Center. The gorilla is posing similarly to the statue of liberty holding a torch in its right hand and a tablet in its left . However the tablet is not inscribed with the date of American independence, instead it reads:

any age any time.

It does not stop them

What is symbolized by this gorilla is not well understood. Perhaps the gorilla symbolizes a person with epilepsy and their highest potential is posing like the statue of liberty?

When Epiplepsy-UNY was asked about the statue (it's outside their building), their response was: "Yes, this was done as part of a fund-raiser several years ago in connection w/ Dixon Schwabl Advertising, when many different animals were used (after the horses) as part of a campaign. The Epilepsy Foundation did some research and discovered that gorillas were very family-oriented and caring and we hired 2 artists to help us. These artists had done many of the horses the previous year, and they felt that the gorilla could hold our logo, the flame, and that dressing the gorilla in a statue of liberty would be appropriate. The animals were dressed up in many different ways. This was right after 9/11/01 I think.

Anyway, so now we have a gorilla, w/ some signage on it about epilepsy and some donors listed who gave to the campaign."

Warning: it is illegal to trespass on the active parts of this property. There are a few police people patrolling the grounds regularly.