The accuracy of this page is disputed 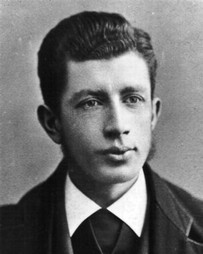 Francis Bellamy Studied at the University of Rochester

Francis Bellamy (1855 - 1931) studied at the University of Rochester and the Rochester Theological Seminary. He wrote the original "The Pledge of Allegiance" in August 1892. Bellamy was born in Mount Morris, NY and came from a long line of famous Americans: notable relatives include his cousin Edward Bellamy (novelist and political activist), and his great-grandfather Joseph Bellamy (renowned religious author and preacher during the Great Awakening).

Bellamy worked for six years as a pastor in Boston, but his radical economic and political views were not well received by his parishioners. He was an advocate of "Christian Socialism", which argued that socialist tenets were mandated by Christian doctrines. After leaving his ministry in 1891, Bellamy took a job with the Youth's Companion, a leading children's magazine. Bellamy was very conscious of his Anglo-Saxon racial background and wrote articles condemning unlimited immigration, although he tempered his xenophobic views with a call for free, universal, compulsory education aimed at creating solidarity among diverse immigrants and the native population.

After hitting upon the idea of giving away flags to sell more magazines in the late 1880s, the magazine's management launched a patriotic campaign to put flags in every school that was to culminate in the 1892 Chicago Columbian Exposition. Bellamy and his supervisor, James B. Upham, felt that the flag needed an appropriate ceremony associated with it to create the feeling of national unity that both men thought was threatened by America's changing demographics.

His original pledge read as follows: 'I pledge allegiance to my Flag and the Republic for which it stands—one Nation indivisible—with Liberty and Justice for all.'1 The pledge was originally begun with a military salute that turned into an outstretched hand with a raise palm at the word "flag." This was changed to a simpler hand-over-heart salute during World War II due to its distasteful associations with Germany's Nazi regime.

Bellamy considered placing the word 'equality' in his pledge, but knew that the state superintendents of education were against equality for women and African Americans. Several edits to Bellamy's pledge were made over the years, the most notable being the inclusion of 'under God' in 1954 after a successful campaign made to Congress by the

After Bellamy's death a dispute over the authorship of the pledge erupted between his son and the son of James Upham. A committee of historians ruled in favor of Bellamy in 1939, and after the debate surfaced in the 1950s a group from the Library Congress conducted further research and again supported Bellamy's authorship. A collection of materials relating to Francis Bellamy's life and career was assembled for this process; the collection now resides in the Rare Books collection of the University of Rochester (