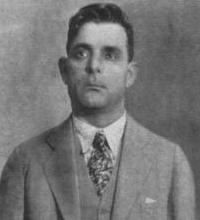 Wikimedia Image Giuseppe "Joe" Aiello was an organized crime figure born in 1891 in Sicilia, Italy. He immigrated to the United States around 1912, and lived on the north side of Chicago. After getting into conflicts with Al Capone, Aiello because president of the Unione Siciliane. Shortly after he was machine-gunned to death in 1930. He was originally buried in Mount Caramel Cemetery in Chicago and was later moved to current resting place in Riverside Cemetery.1