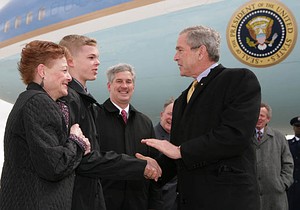 Jason McElwain (aka J-Mac) is a famous resident with autism who became a national sensation when he scored twenty points for his high school basketball team at Greece Athena High School.

In honor of McElwain, 3,500 'J-Mac' bobbleheads were given away at a Rochester Red Wings home game in 2006, in which he also threw the first pitch.1