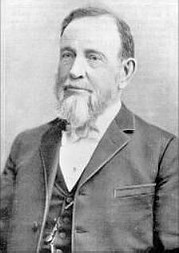 In 1882, Hulbert Harrington Warner, patron of Swift's astronomy, financed the building of the