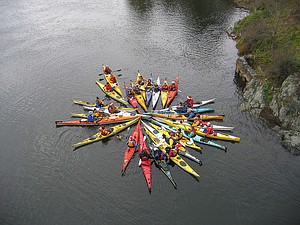 Paddle for Families was a fundraiser for Families in Recovery that took place in Summer 2008 to benefit children and others impacted by family alcoholism. Similar to a paddle-a-thon or bike-a-thon, participants got sponsors to make donations in support of their paddling. There were several ways to participate, including:

At the end of the event, participants were invited to a party at Ellison Park to celebrate. The All Night Ramblers played Cajun dance hall music and there was BBQ.