Please take a moment to

watch this video on the horrible PROTECT-IP act. If it passes — and it looks like it has a very good chance of passing — sites like RocWiki may have to be shut down due to extraordinary legal costs.

https://wfc2.wiredforchange.com/o/9042/p/dia/action/public/?action_KEY=8173 sign this petition to help stop the bill.


2011-11-16 12:52:24   For the record, many people also think this does not have anywhere near the teeth some are saying it does. I personally think this is a case of people acting like chicken little. The sky isn't falling. —BadFish

2011-11-16 15:36:41   I've spoken to others who are EXTREMELY concerned. I think there are people with opinions on both sides and I'm not going to discount either when the gov't is involved.—PeteB

2011-11-17 14:45:51   Well it removes the safe harbor component of the DCMA making RocWiki accountable for the actions of its users...that pretty much makes a wiki impossible to manage. —DamianKumor

2011-11-18 17:11:57   No, seriously. I am not for or against it because I am not sure if the text of the bill would really do what everyone says it will. Not trolling at all. As much as I like some of the companies and web sites against it, I cannot take their word for it that the bill says it will do they say it will do. I want citations from the actual legislation. (Honestly, no ill will meant behind this.) —BadFish

2012-01-18 00:09:50   It's been January 18th - Blackout Wednesday - for a few minutes now, and I visited hoping to see RocWiki.org blacked out. What are the chances of this happening? House members from the Rochester and WNY areas have been mum on their support for SOPA, and both of our NYS Senators openly support PIPA. We need constituents - and RocWiki users and contributors - to keep the pressure on... —daverea

In short, I'm not going to unilaterally restrict access to others' content based on what I believe to be the "right" thing to do.

Should I have pursued this more actively, as a community member? Probably. Sometimes I forget that RocWiki is a big thing, and I have a lot of influence here. Ultimately, though, I serve the community, and I try to listen more than I speak. (I also go to sleep before midnight and don't check my e-mail until pretty late in the day, which is why it's nearly 11 hours in and there's still no "official" response. :-) —RyanTucker 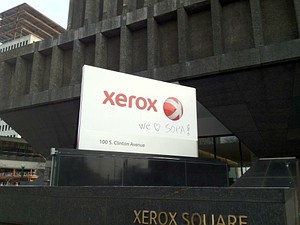