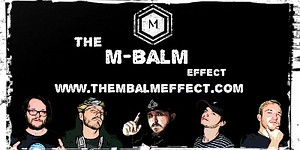 The M-Balm Effect is a Rochester-based hot talk podcast/webshow. Hosted by

M-Balm (Harold Brush), the show first began on YouTube in 2019. The content contains savage commentary along with crazy antics as well as interviews with local artists.

In April of 2019, the show uploaded it's first episode titled "The Greatest Man To Ever Live". The episode was pre-taped and the content included a night out at a local bar in Webster and meeting a man who claimed that he was "the greatest man to ever live". The M-Balm Effect at the time only had two co-hosts alongside M-Balm, Zu Keeper and Uber Mike. The show was broadcasted from Zu's apartment up until October of 2019 when the show was re-located to an actual dedicated space for the show's studio.

In January of 2020, the show split up into two different shows with Ghost, Omen and Austin Dash who were new co-hosts of the show. M-Balm, Omen and Ghost hosted TME: Afterburn and Zu Keeper, Uber Mike and Austin Dash hosted TME: Blitzed. M-Balm unveiled that there will be a TME Undisputed championship while revealing the championship belt on Blitzed. The show went back to being just one show under The M-Balm Effect again after the pandemic due to COVID-19. In May of 2020, Uber Mike left the show and left the crew down to just five crew members.

Throughout the year, The M-Balm Effect had various guests on the show including Rochester's very own Richard Leigh otherwise known as RLShow, Rochester metal band "Perspectives" and even DJ Primal! The show had an addition of a female to the show who went by the name Cori. The crew upgraded their equipment including microphones and a new table for the studio. The show parted ways with Cori in November of 2020. After almost a year of revealing the show championship, Omen won a one year old Christmas cookie challenge in order to become the first ever TME Undisputed Champion.

In January 2021, it was revealed on the show that video game streaming will be offered on The M-Balm Effect. It will include a variety of games being played as well as challenges for the TME Undisputed Championship.

The show mascot Joyce, which is a mannequin of a savage old lady with a scythe and in a wheelchair that sits in the studio, started having segments where she talks to the crew and even gave one of the co-hosts a lap dance. M-Balm explained on an episode of TME: Afterburn that Joyce is actually a reference to someone he personally knew.

During the February 20th show, it was announced that there would be an extension of the show called "ROC HARD" which will feature local bands from Rochester and surrounding areas in studio hanging with the TME Crew. On February 27th, "ROC HARD" debuted with special guests Soma Slumber kicking off the first ever episode.

May 1st, the show celebrated it's 2 year anniversary with a best of 3 Mortal Kombat match between Ghost as Fujin and Omen as Sub-Zero. Omen lost his title to Ghost by Brutality in the 3rd and final match, solidifying the new reign of Ghost as Undisputed Champion.

The podcast is now currently available in a video format on the Spotify platform.