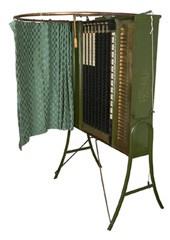 Smithsonian Image The first "Automatic" Voting Machine was invented in 1892 by Rochester resident Jacob H. Myers. It was intended to replace the hand-tabulated ballots that were used previously. The first machines from Myers' company were used in the 1896 election but were not problem-free. Myers withdrew them in order to perfect the design. This opened the door to a rival machine design from former Myers assistant William P. Davis that would eventually capture the city contract. The competition between the two companies would help drive the acceptance of the machines by keeping the company names in the public eye.

"The mechanical lever machine has served our state and county admirably. This historic piece of voting equipment was used throughout various parts of the country since its inception in the 1890s. The machine, steeped in history, was actually invented by Jacob Meyers of Rochester and manufactured in Jamestown, Chautauqua County. We have had a historic connection with this mechanical machine that has elected officials at federal, state and local levels throughout the past century." 2