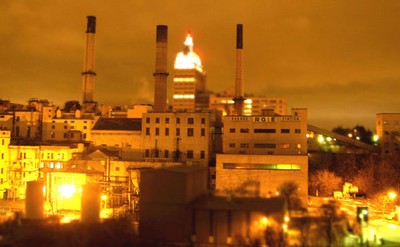 An out-of-service power plant located down the river from High Falls, Beebe Station was used to produce power as early as the early 1900's, and was shut down by RG&E in 1999. Two of the plant's three smokestacks were torn down in 2007. The remaining smoke stack has the words "High Falls" painted on it.1

This plant often comes up in discussions of potential structures to explore. Little is known about access to the site. However, it is worth noting that tar residue at the plant may pose a health risk to would be explorers. There is also a fair deal of asbestos throughout the structure. Anyone entering the older sections of this complex should bring at least an N100 respirator.

It appears that part of the complex is still in use by RG&E to house some auxilliary functions like equipment certification so it's unlikely the property will be totally empty. The inside is still powered, but has many old appliances, motors, paperwork, etc.


2008-04-14 08:06:46   RG&E and I are currently in a dispute so I have no trouble being rude to them: Here's a portion of the original article which stated how to get in. This is not my content, I am quoting what was deleted. Starting with after you get through the gate above: "Once through you must traverse to the top of the roof, which you can climb to. Come up to a catwalk, and go across it. Caution should be used when crossing it, as it is very beaten. You will find a door; climb up a few pipes to get to it and BAM! you're in! Enjoy!" —BadFish

If you really want to impress, hang a Free Tibet sign from the 3 smokestacks.

2008-12-11 18:48:35   I don't mind if they leave the smokestack with "High Falls" painted on it standing. I think this rusty eyesore should be summarily destroyed, though, and the land down below opened up so we can use it. I mean, have you seen the rust on this place lately? I looks like a giant, 747-sized seagull dropped a post-Taco Bell rusty-deuce on it. —BatGuano

2009-05-23 23:11:57   macman, i have no idea although buildings from that era typically contain asbestos. during any demo work great care is taken to minimize asbestos issues so I wouldn't worry too much. besides, asbestos isn't billowing/spewing out, it's just sitting there, waiting to be disturbed. —BatGuano

2009-07-13 11:01:37   BatGuano, and anyone else interested: There were a /lot/ of signs there warning about asbestos. A few spots were covered in relatively new plywood with asbestos signs on it. A couple rooms actually had large plastic sheets duct-taped up to prevent airflow- those places I left alone.

Entry was possible via one gate (squeezed through a bent gap), then by crawling under the corner of an out-building by the river. From there it was possible to get into the structure proper via a door that was left unlocked by pure luck. —macman5151

That said, you are guys are right... BB is loaded with asbestos. Years of water dripping on steam pipes, supply lines, etc. from leaky roofs have essentially stripped it all off, and so most of it lays in piles around the building. The really cool areas to explore are more prone to this hazard.

Might want to get in what explorations you can, the demo ball cometh... —Jolly

2012-04-28 15:43:32   We were unable to get in a few weeks ago. It looks as though it may be being restored. The place was surrounded by what looked like a brand new security fence, as well as several cameras. A few lights were on inside as well. That's not to say it's impenetrable, but the chance of getting getting arrested was enough to keep us out - this time at least. The adjacent incinerator plant (or at least what's left of it) was easy enough to get in to, so the trip wasn't totally wasted. —HomelessHal

2014-06-22 15:47:41   I was at the site a few days ago and it looked like hopping a couple short fences to get into the compound would not have been a problem. The post by HomelessHal warning about cameras was the only thing that kept us out. Does anyone have a good idea of what the risk of arrest would be for entering this station? Is there an active security unit somewhere monitoring the cameras? —greenguy33

2015-03-04 21:58:31   As far as security, I have seen security trucks doing rounds there late at night. However, me and a friend swam across to the weird tunnel/doorway thing on the other side and we were walking around the property and didn't have any trouble or even concerns. No one to be found. As far as the building, I have no clue but I would like to get in. —jserr