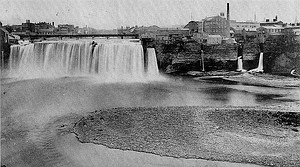 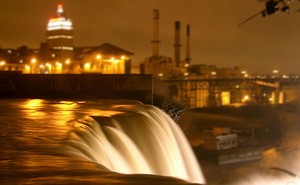 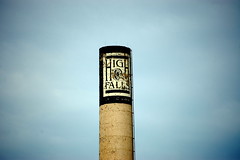 just North of downtown Rochester. Because of the falls, that section of town has come to be known as the High Falls District 1.

This area was once the center of Rochester's economic engine, due to scores of factories and businesses on both sides of the gorge using waterwheels to drive their workshops.

In the early 2000's the City of Rochester spent a good chunk of money trying to turn this section of the city into an entertainment district, but it never caught on. In recent years the area has evolved into a residential/business area with loft apartments and office space in tastefully renovated historic buildings. There are still several restaurants serving the area, as well as the nearby Frontier Field and Kodak Headquarters.

The High Falls area was once the heart of the Rochester brewery and flour processing industry. In 2012 the Genesee Brewing Company renovated a historic brewery building just across the Pont de Rennes from High Falls into a visitor's center, microbrewery and restaurant. This Genesee Brew House provides a great view of the falls from its balcony and rooftop.

2007-05-29 14:07:50   Does anyone know the history of the door at the base of the falls. Looking at the falls from the footbridge, its on the left and so mysterious. I want to plan an expidition, but until then, I am curious to learn more! —LongGone

2008-03-24 08:53:58   Does anyone know the true height of High Falls? I believe that the crest was lowered for constructoin of the RR bridge. The photo from Geology
and Industrial History of the Rochester Gorge appears to indicate this. —ScottEnsminger

2008-12-13 10:08:42   How many cities can say that they have a waterfall in the middle of downtown? I can't think of any major city I've visited (besides Niagara Falls, of course) that has one. But for some reason, Rochester kind of pushed this area to the side. This could have (and should have, in my opinion) been the center, or the focal point, of our city. Not in terms of industry and what not.. but a feature of our city.. a very unique one that quickly summarizes the natural beauty of Rochester and our respect for it. Now, Rochester is trying to force people down here after years of neglect. Listen, I love telling people I can see where Genny Cream Ale is made from work but I don't actually like looking at that monster factory contrasted with the Falls. Same with the Beebe Station: on top of being a rusty eyesore, it blocks the view of the Falls! I feel sorry for the future tenants of The Mills! In short, I'm saying that before Rochester expects people to flood down to High Falls, maybe some of the blight in the area should be dealt with. —BatGuano

http://www.rochester.lib.ny.us/~rochhist/v58_1996/v58i3.pdf) to allow greater water capacity during flooding. This attempt was prior to the building of the Mt. Morris Dam in the 1950's, and has since been adaquate to control the waters of the Genesee. —JimGibson

http://www.rochestersubway.com/topics/2012/11/exploring-the-caves-of-rochester-ny/ This provides some info on the mysterious door at the bottom of the falls, seen in the pic above. Scroll down below "RICO Cave", and you will find original blueprints for the tunnel! I still wanna explore it. This directly relates to the illuminatte catacomb system —WBaldwin004