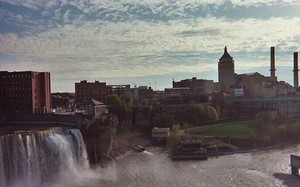 There are many things that have helped shape this city over the years but none may be as important to Rochester as the Genesee River. Its role in the birth and initial growth of the city was critical. Without it Rochester probably would have never been.

Because the river drops 225' within Rochester's boundaries it's not exactly a good means of transportation but with the several falls that speckle downtown it provided the awesome power required to make Rochester the Flour City. With the Erie Canal to one side of the city and the Lake to the other, transportation of goods out of Rochester was not a problem. The two combined allowed Rochester to become the largest flour-producing city in North America.

About the Genesee
The Genesee River starts as a spring on a farm in Gold PA, which is in the Allegheny Mountains. It runs (and falls) through countryside, towns and small villages until it gets to Rochester where it slashes out into Lake Ontario. The entire run is about 160 miles and the total drop in elevation is about 2240 feet.

From Lake Ontario the Genesee is generally navigable up to about the Veterans Memorial Bridge by small boat. On the South side the river is navigable from the Erie Canal up to about Corn Hill Landing by mid-sized boats. Small boats can go far upstream of the canal.

an article in the Democrat and Chronicle reported that the Genesee's water, heavily polluted and sentiment-laden by the time it reaches Rochester, is slowly improving. A 2004 test by environmental officials found the water to be the best they had seen since testing began in the 1970s. More information may be found

Major Tributaries in the Rochester Area:

Located Along the River


2006-11-10 00:11:30   Talking to my Grandmother a few weeks ago, she told me something about a fountain that used to be in the river near the new T-H Bridge. I am not sure of a time line for said fountain, I was just curious if anyone here had a clue about this... Thanks. —PhilTrautman

2012-06-22 10:35:15   The fountain is between the 2 legs of the Y-shaped bridge, just north of Main St. It worked for a couple of months when the bridge was new (back in the mid-late 1960's), until the river silt clogged the workings up, and it was abandoned. When the water is low, you can still see the workings, in a triangular concrete structure on the riverbed. —alex-c