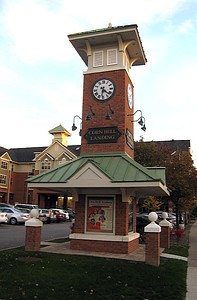 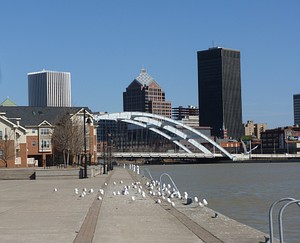 Corn Hill Landing is located in Corn Hill along the Genesee River, almost in the shadow of the Douglass-Anthony Bridge. This mixed commercial/residential development includes 127 apartments, 15,000 square feet of office space and 14,000 square feet of retail and restaurant space. Residents may park in its underground garage. With its riverfront location, it offers a 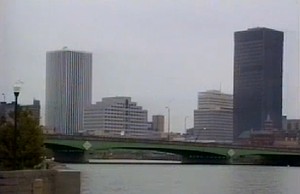 View of downtown from the current site of Corn Hill Landing in March of 1992. Visible is the absence of the Freddie-Sue Bridge, Legacy Tower and Tower280's new blue glass facade.

- Exodus is starting, get ready for Fast Ferry part duex.

2008-03-19 23:52:09   A nice idea, but the apartments are horrendously overpriced. Will any Rochester developer create a real city living alternative for young professionals? —NathanHenderson

2009-04-17 18:15:12   I applaud the effort at Corn Hill Landing although it seems to be trying to create a lively scene out of nothing at all. I can almost guarantee shoddy construction of the apartments and overpriced rents although I don't have intimate knowledge of either. I hope it succeeds because it really is some prime real estate (right on the river with a great view of the bridge). I just hope people are willing to let it go through several iterations/convulsions because, right now, it still needs to find an identity. —BatGuano

2009-08-05 09:13:39   While the management team is good...that sort of must be expected since the leasing office is on site and the management building is right across the street. Good location, but other than that this place is extremely overpriced. I agree with MrRochester's assessment - very dated. Some of the layouts are nice, but again, for a building built ~3-4 years ago, and for the price you pay you should get more if they want a true alternative to Park Ave/suburbs. They are also very poorly constructed - the walls are extremely thin, and if your neighbor has a hair dryer on you'll be able to hear it. I was one of the first tenants in the 2nd "wing", and a pipe had burst in one of the bedrooms in my apartment...forcing me to live in the living room for a month while the entire ceiling was removed and the pipe was replaced - and no compensation or apologies offered. Also, $150 a month for an underground parking spot? No wonder the outside lots are full.... —Gordo