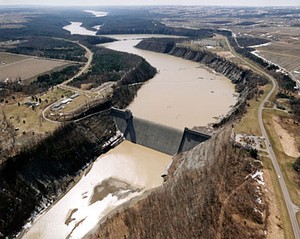 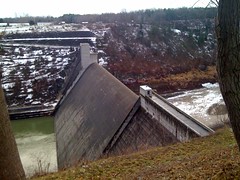 Mt. Morris Dam provides flood control to the city of Rochester, New York; since its completion in 1952, according to

FEMA, estimates are that more than $1 billion dollars in flood damages were avoided by the operation of this reservoir. It is located on the Genesee River near the northern end of Letchworth State Park.

Though the Genesee River was a convenient blessing for waste disposal in our city's early history, even it was worthless to flush away and dilute waste during dry stretches. This and mill concerns were apparently the primary reasons for lobbying Congress for inclusion of the $25 million dollar project in the

Dam construction began in 1948 and ended in 1952. It is said to be the largest dam east of the Mississippi.

Army Corps of Engineers, the maintainers of the dam, offer tours from their facility on the East bank of the river.