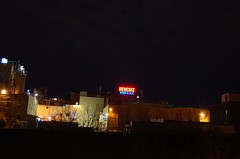 Genesee Beer and Ale sign at night by Andrew88

The Genesee Brewing Company was founded in 1878 1 from the Rau and Reiskey brewery. The early brewery was successful because of its location near the falls and the use of caves, dug in the rocks, to help keep the beer cool without refrigeration.