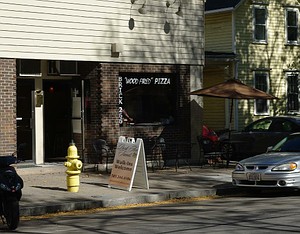 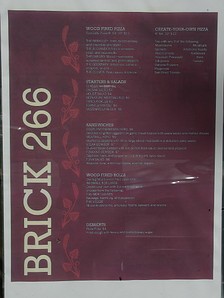 Brick 266 was located on Park Avenue and specialized in wood fired pizza. It opened at the end of July 2010 and closed sometime in June 2011.


2010-09-12 22:32:02   We were here early last week. The tables outside were taken so we sat inside. It was really warm inside due to the oven but it would make for a cosy space during the winter. There are around 3-4 small tables inside. They did not serve tap water so we ordered some bottled water. We split the ravioli appetizer ($5) and a pizza ($9). The ravioli appetizer was deep fried so it was greasy but good. The pizza was very good - I loved the thin, crisp crust. Initially the owner (and his assistant) thought they ran out of jalapenos but after we got the pizza, they found a small supply in the fridge. They gave us a few to sample (the owner pickles the jalapenos himself) - they were delicious and spicy....I definitely recommend getting them as a pizza topping. The meal was reasonably priced - around $16 before tip/tax. My only complaint is that the server seemed sort of lost and disappeared for long periods of time but the owner was close by so we did have someone checking on us. The owner was really friendly, the food was good and I would definitely go back. —OneLove

2010-12-30 10:31:01   I ate dinner at Brick 266 last night with my fiance for the second time. Both times the food is delicious! The pizza is a thin crust brick oven style and the dough is wonderful. We split a fabulous Caesar salad (they even put it on two separate plates for us). The restaurant is small and it was packed when we got there, so it was a little noisy; but everyone was so happy and friendly, it just felt like a very cozy and neighborhood hangout, and we didn't mind a bit. Everything we have eaten at Brick 266 is so good we will go back again and again. I would strongly recommend this place! —KatieS

2010-12-30 10:57:37   Hello. My wife and I went a few weeks ago. The food was a great - Caeser salad, ravioli app, one of the pizzas and a stromboli. The owner was very friendly and FUNNY. His buddy was the server. A great neighborhood place. Your noise and service complaints come off as a little pretentious. This is just a small, laid back place with a friendly atmoshphere. You are missing the point. The Italian deli didn't survive here, let's support this place. —BigPun

2011-01-20 10:25:11   @BigPun: Allow me to clarify, for I think you misunderstood the intention of my comment. The comment on noise level is neither a complaint or a criticism. We come from loud families and felt right at home. My fiance and I very much enjoy ourselves and go regularly. The comment about the noise is merely a note for people who might be looking for a quieter place to enjoy a meal. I would not change a thing about Brick 266 —KatieS

2011-04-10 13:45:50   Definitely one of the worst dinner experiences that we've had in recent memory. What we saw here the other night would be acceptable for a place that had only been open a few days, but these guys have been at it for almost a year? The service and atmosphere were very casual and "fun", which is fine as long as the service and food are good, but they weren't. The owner was friendly, but couldn't stay focused on the job, he was disorganized and everything took forever. The appetizer we ordered, fried mozzarella, came in two sections, one was OK, the other was an empty shell of breading, no filling. The fryer was turned up way too high. I will say that the waiter did remove it from the bill without prompting so that was good of him. The salads were nothing but a pile of lettuce with some croutons and an olive or two. On the plus side, their dressing was pretty good. Our pizza rolls weren't bad, but took forever to arrive. There is a difference between casual and just plain bad. The experience made it seem like a couple guys had a few beers and decided "hey lets open a restaurant" with no actual idea as to how to do that. Sorry guys, we won't be back. —DottieHoffmann