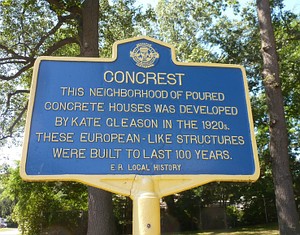 Concrest is an unusual tract in East Rochester. It was developed by Kate Gleason during her time as president of the First National Bank of East Rochester. She was appointed to this post in 1917, becoming the first woman to achieve such a position without the benefit of family ties.1 During this time she became interested in construction and started a business called Concrest Community to build affordable homes for working families. She kept costs low by utilizing mass production techniques similar to those used in the automobile industry. The homes - designed in the style of a small French village - were made with poured concrete using unskilled labor.2 Gleason described her work in a 1921 issue of the trade magazine Concrete entitled "How a Woman Builds Houses to Sell at a Profit for $4,000." Concrest subsequently became a model for other developers.3

The neighborhood still stands today. Its winding one-way streets are about as wide as the average driveway, encouraging people to stroll rather than drive. Each resident has a parking space, as there are few garages. While most of the houses have tiny yards, Concrest Park provides an attractive green space.