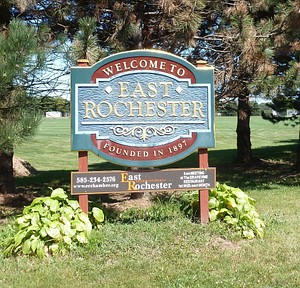 The Village of East Rochester started out as the Village of Despatch in 1897, so named by the Merchants Despatch Transportation Company (MDT), was laid out as a planned community designed around the railroads and the MDT Plant. Much of the original land which became the village came from Fairport businessman Walter Parce1. Parce's land was developed to provide housing for employees of MDT and he is considered the founder of Despatch, and hence East Rochester2

To better showcase the village's proximity to the city of Rochester, the village was incorporated as the Village of East Rochester in 1906. The boundaries of the village were divided between the towns of Perinton, Pittsford, and Penfield. In 1982 the residents of the village voted to become a coterminous town and village.

The village has some unusual architectural heritage in the form of the Concrest neighborhood, designed and built by Kate Gleason in 1920.

East Rochester can be reached by bike from the city by traveling in a straight line down East Avenue, which eventually turns into Fairport Road. The distance from downtown is about eight miles. 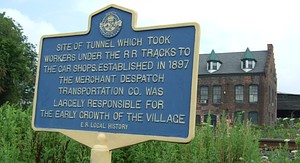