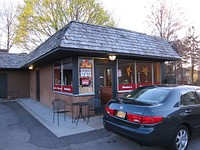 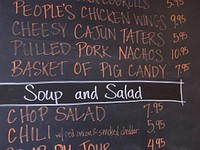 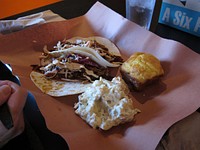 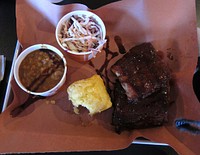 Good Smoke BBQ is a BBQ restaurant and caterer that opened their first retail location in East Rochester on March 9, 2012. They started as the Good Smoke BBQ competition team in 2006 and attend BBQ competitions around the North East. Opened a second location on the west side in Chili, in May 2017. A Third location opened in Webster on January 9, 2019, but was rebranded as Roc Style Chicken & Burger.

On September 24 2019 the owners opened a South Wedge location with a limited menu of Burgers and sandwiches called Good Smoke Snack Shack, which closed after a few weeks so the owners could spend time fixing the Chili Avenue location after it was hit by a truck.


2012-04-05 19:37:29   Delicious dinner here tonight. The sides were excellent. The pork was cooked/smoked to perfection. Our only complaint was a minor one, the BBQ sauce was a little on the sweet side for us. However, they have various sauces at the table, if you don't like a real sweet sauce, just ask them to use less when they serve you, and grab whatever you want tableside. —DottieHoffmann

2012-05-16 10:06:24   Went here for dinner last night. I have to say, I was really impressed. I thought it was a sit down restaurant but it more like fast food. You order at the counter and there are tables inside and outside that you can sit at. They will bring you your food when it is ready. They also do take out. I ordered the pulled pork tacos (Thanks, Dottie!) with a side of their smoked potato salad. The tacos were awesome! Like Dottie, I thought their orginial BBQ was a little sweet but the hot BBQ was really good. And it actually had a good zing to it without being too hot. The smoked potato salad was good as well although it could have used a tad less mayo. It came with cornbread which was super moist and topped with honey. The menu board claims that all of their sides are homemade and I intend on sampling different ones. My partner in crime was also very pleased with her dinner. Will definitely go back. A+, Good Smoke! —dmarie

2013-05-21 20:37:10   Just ate at Good Smoke again and I continue to be impressed. Staff was super friendly and came outside to check on us several times. The pulled pork tacos are really good but a little heavy on the sauce. No worries, I'll just ask for it on the side next time. The cornbread is so, so good and the Cajun cheesy tater tots are sinful, but worth it. They will continue to get my business! —dmarie