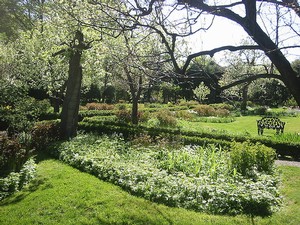 Ellwanger Garden is a beautiful and historic formal garden, hidden behind a stone wall on Mount Hope Avenue, originally created out of a pear orchard in the 1860s and was George Ellwanger's personal garden. Ellwanger was a German immigrant and one of the partners in the noted Rochester firm of Ellwanger and Barry Nurseries. The house and carriage house adjacent to the garden are privately owned. The garden itself is also privately owned, and cared for, by the Landmark Society. It is open to the public by appointment and during the Lilac Festival and Peony Weekend.

2008-01-15 10:48:57   Ellwanger Garden was planted in 1867 by George Ellwanger,cofounder of Ellwanger and Barry Nurseries. It was his personal garden. Today the garden is owned and maintained as a living museum by the Landmark Society and is open by appointment only except for the public hours during the Lilac Festival and Peony Weekend. It is not a public space. It is private property as are the house and grounds around it. Visitors are welcome when the garden is open. For more information please go to landmarksociety.org —BeverlyGibson