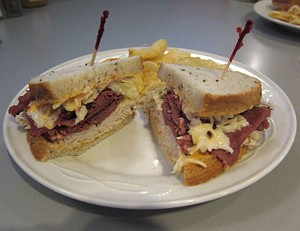 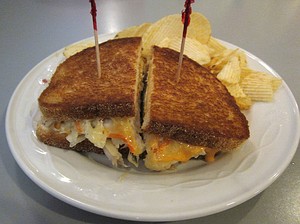 Fox's is a NY style deli in Winton Place. Take-out and dine-in are available. The menu features a big selection of sandwiches with names drawn from show-biz and pop-culture. Also offered are soups, salads, baked goods, latkes and borscht.

Fox's isn't officially kosher. They have some kosher cold cuts in the cooler, but they have that other stuff too.

At the end of February 2022 the Fox family sold the restaurant to new owners, who plan no significant changes.


2008-01-26 09:55:40   Fairly decent deli, not the best though. I would not recommend the Potato latkes, They appear to be made from mashed potatoes. The potatoes are supposed to be shredded, these are clearly not so the consistency is odd. The Half sour pickles are fairly good and the corned beef is always nice and lean. —NewtonNola

2011-02-18 20:12:02   Love this place-delicious sandwiches including many vegetarian options, excellent soups, great salads, and tasty desserts. I only wish they were open for dinner! —TrishHeckmann