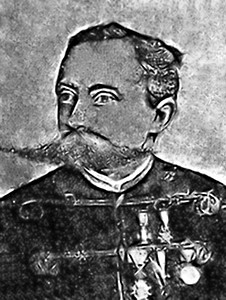 Francis Tumblety was a wealthy and eccentric Rochester resident, who has been cited as one of many possible suspects for being Jack the Ripper. (See

Born in either 1830 or 1833 near Dublin, Ireland, Tumblety was the youngest of 11 children. He was only about five months old when his family moved to Rochester, NY. They lived in a house on Sophia Street (now called Plymouth Avenue). His fortune was largely amassed by traveling throughout the United States, Canada and Europe selling quack medicines. Canadian authorities suspected a possible link between his medicines and the death of some of his customers, but he fled the country before further investigation could occur.

He was residing in England during the late 1880s when the Jack the Ripper murders occurred. He fled the country after being arrested on charges of "gross indecency", apparently for engaging in homosexuality, which was not tolerate in England at the time. He was mentioned as being a Ripper suspect as early as 1913, but recent research has largely discredited this possibility.

Tumblety died of syphilis in 1903, and is buried in Holy Sepulchre Cemetery.