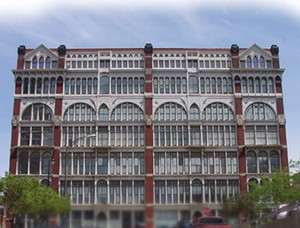 The H.H. Warner Building is a seven-story cast iron historical landmark in the St. Paul Quarter. Its style is Romanesque with Gothic details, with elaborate decorations and cast iron and Berea stone piers. According to its website:

The first floor contained all of the Warner offices and the Warnerâs Safe Cure shipping department. On the second floor, the advertising and publishing departments were located. Warnerâs mailing department, which distributed millions of pieces of promotional material each year, was located on the third floor. The fourth and fifth floors were where the bottling and laboratory were located. Long gone, is the daily chatter of people producing and distributing what many today call "snake oil"â¦1

The building was listed on the National Register of Historic Places in 1985.

In ["2009 Mark IV Enterprises began converting the upper floors into high-end rental units. Today the H.H. Warner Building is one of downtown's most famous loft addresses. The first floor contains The Kitchen Keg.


2017-07-06 18:12:25   We lived in the H. H. Warner Lofts from 6/1/16 to 8/31/17. What initially struck us was the beautifully appointed interior; 13â ceilings, arched windows and open living area. We were happy with the interior of our unit throughout. However, what struck us after we had been living there for a little bit was that the exterior of all the windows had about three or more years of accumulated grime. After consulting with the owner, the superintendent told us that it was simply too difficult to clean the outside of the windows and it would not happen. We appealed in writing to the owner (Mark IV Enterprises) who never even acknowledged our letter. The windows remained filthy throughout the entire term of our lease. Beyond the frustration over the filthy windows, the neighborhood stinks, literally! On one side of the building drug addicts and alcoholics hang out, drink, shoot up, litter and urinate on the side of the building whenever the urge moves them. On the other side of the building that had a little more privacy (in the alley between the RTS bus garage and HH Warner Lofts) we would occasionally encounter human feces. Every time we went out our front door to get in an exercise walk or to attend an event downtown, we would ALWAYS have to pass through a gauntlet of drug addicts, alcoholics, and pan handlers. Never were we able to feel at ease in this neighborhood.
The attitude of the owner, the lack of attention to the filthy windows all coupled with the low class and dangerous neighborhood motivated us to move out just as soon as our lease expired. We would not recommend living at HH Warner lofts.