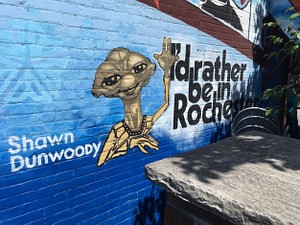 IRBIR: Around 1980 (before E.T. hit) the Chamber of Commerce introduced a wacky little alien character named IRBIR (acronym for I'd Rather Be in Rochester - duh) on their commercials. He even appeared around town in "person" at malls and at Camp Good Days and Special Times. See below for Irbir's history from one of the creators.

The photo at right is a mural celebrating IRBIR (from the Wall\Therapy project ca. 2018, on the wall of Hogan's Hideaway, as viewed from the parking lot of Parkleigh.) The mural seems to have been the work of artist

2006-09-06 19:34:34   Well, IRBIR was for real because a friend who designed the character and I built the puppet for if memory serves two commercials. His name was IRBIR and he was a Norgan(a contraction of "nuts" and "organ" if you can believe that). We also spent many weekends doing live appearances out at what was a new mall at the time in McCurdy's I think. I will always remember that puppet very fondly as it was the start of a wonderful career in special effects and Animatronics specifically. Ouch, my brain hurts now. I'll have to see if I still have some pictures of the little bugger. —DaveKindlon

2006-09-08 15:56:00   Here's the Irbir story, Chapter 1: 3 years BEFORE ET was released, my friend Jeff Sackoff came to my office (The Effects Factory) with an idea for doing a commercial that would showcase our talents. He had gotten permission from the Chamber of Commerce to use the jingle to the "I'd Rather Be in Rochester" civic pride project (from Hutchins Y&R), and suggested we do a kids commercal about a little alien landing in Rochester because he'd rather be there than anywhere else. We storyboarded a spot that had him arriving from space, passing by the pyramids, the Eiffel Tower, the Staue of Liberty, and coming to Rochester where he looks down at and says, "I'd Rather Be in Rochester...It's Got It!" With the C of C's blessing, we began production. Irbir was the result of several talented people working together. In addition to Dave Kindlon, known more recently for his work on the "starring" robot in I, Robot and other films (note that "Irbir" is an acronym of "I'd Rather Be In Rochester)... —BrianBram

2006-09-08 16:00:17   Chapter 2: ...In addition to Dave Kindlon there were about 10 others that directly contributed to the project. Dave's friend Derek designed Irbir's face. I can't remember everyone's name now, but there was Larry (?), Marte Cellura, Chris Elling, Gale Gand, Terry Conheady, legendary view camera photographer Mark Sampson, and Jim Bennett, a makeup fx friend of Dave and Derek's. If I've left someone out, please forgive me. We built the Irbir figure in an industrial loft in the Cox Building at 25 St. Paul Street. We did the first commercial at Channel 31 where I had done the "Sci-Fi Saturday" movie open. Mark Phillips and Ron Dylewski at 31 were kind enough to let us use the studio for our production. They also arranged for Irbir to appear on The Buckaroo Club with Ranger Bob several times, and had Irbir do a RIF (Reading is Fun-damental) PSA. It took seven of us to operate the puppet in that first spot... —BrianBram

2006-09-10 18:22:53   Chapter 3: ...The first spot, featuring great music by Terry Conheady, aired with heavy rotation (lots of showings), and we decided to make a second one. We rented a cherry picker and shot on Cobb's Hill (with giant rubber mushrooms to make the scene more magical), following Irbir as he walks up the path to look out upon his chosen home, Rochester. Then we built a version of the puppet that was capable of live appearances. A cabinetmaker whose name I've forgotten built a large-scale version of Irbir's spaceship, MXR donated a pitch transposer, and we began to do appearances in shopping malls. Derek designed T-shirts (for sale at McCurdy's) and Terry operated the puppet (redesigned to be operated by one person). We did several live appearances at area malls and at Camp Good Days and Special Times before retiring Irbir. Last I knew, he was in a series of boxes in Jeff Sackoff's basement around the corner from Jeremiah's. —BrianBram

2006-09-10 18:36:59   A couple of final notes: ET came out about 6 months after Irbir debuted on the air. We ran into a lot of people who thought this was an ET imitation. Irbir looked absolutely nothing like ET, but the timing was such that people (especially kids) saw any little alien character as ET. We became disheartened as we had to explain again and again that this was not ET. McCurdy's wanted to leverage the Irbir character for promotion (of McCurdy's), but didn't want to pay to license it from us. We offered full rights to the American Cancer Society with underwriting by corporate sponsors, but they declined (Bill Finger, a McCurdy's executive was on the ACS board and allegedly killed the proposal...and Irbir). So Irbir went in the box. Additional info can be found in the Times-Union archives in an article about Irbir by journalist Karen Heller. Regarding images: I have some of the original stroyboards and design materials, and Mark, one of the original team members, has turned up some photographs. If there is interest, I can post some of this. —BrianBram

2010-04-08 12:50:43   I loved IRBIR. I was 10 years old when my familly moved to the states. My brother was an engineering student at RIT and my sisters and I spent a summer with before we moved to California. Can you imagine? Rochester New York was my first home in the states. I would love to see a video of IRBIR. —Mandym

2012-04-23 14:53:02   #rex, either scan it (at the library if you have no scanner) or take a picture of it with a phone and email it to yourself. Go to your RocWiki dashboard (click your name in upper right) and choose the "files" tab. There you'll be able to upload a jpg or similar format. —BrianBram