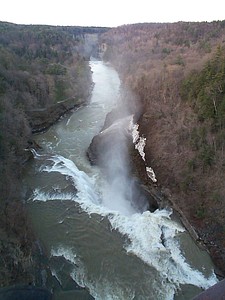 Looking north while on the bridge. by DanDangler

The Iron Portage Bridge, AKA Iron 'Spider' Bridge, is an iron railroad bridge spanning the Upper Falls of Letchworth State Park. It was built by the

Erie_Railroad_Company as a replacement for the original Wooden Portage Bridge destroyed by fire in 1875.

At the time of its construction many were uncertain it would support even a single train because it was built so quickly and inexpensively to replace the burned wooden structure.

"Would the strange looking iron structure, built so quickly and cheaply actually work? No one in the large crowd that gathered at the Bridge on that hot July afternoon knew for sure. First a single locomotive inched across from the east to the west. Then it was joined by a second, which after crossing, was hooked to another engine. Finally six engines crossed the Bridge together, flags waving, to the cheers and salutes of the crowd." 1

That it not only stands—but is still actively used to date—serves as a powerful testament to its strength.

The 820 feet long and 240 feet high bridge is closed to the public. However, the no trespassing signs surrounding the bridge seem to do little to dissuade people from taking advantage of one of the best views in Western New York.