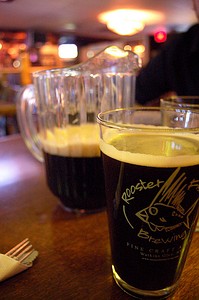 May 2008 Beer of the Month by Rooster Fish

JB Quimby's Public House is a bar and restaurant on South Winton Road located in Win-Jeff Plaza in Henrietta. It features video games, darts, an eletronic jukebox, and plenty of seating.

2007-01-06 21:28:46   Deserves to be better known then it is, but judging from the size maybe it's better that way. The wings are huge and tasty - actually, let me revise that: Anything they put into a deep fryer comes out tasting like manna from heaven. Especially the onion rings. Good food, good beer, main problem is the wait staff can get a bit overloaded but they're friendly and try hard. —RufoSanchez

2007-04-21 09:12:15   I've been to this bar a couple times and had mixed experiences on the food - once it was really great and a few other times I would rate the food as average. I do think the servers are definitely a notch above average - they do a great job accommodating larger groups and seem to enjoy their job. —EllenKelsey

2007-10-30 15:49:28   We ate here on my birthday for lunch and the sampler plate was really good, included tator tots! The waitress was friendly and got my picky burger specifications correct, unlike most places. —SaraChristine

2008-08-29 18:27:13   I've eaten here a few times and somehow never noticed the pulled pork sandwich with pork cooked in Guinness and Garlic. I tried it, and wow... first of all, they gave me enough meat for three sandwiches, and second, it's incredibly good stuff. —McgMatt

2009-11-08 16:25:04   I went here after the RIT hockey game on Friday, seating was easy to get. Our waitress was a bitch though, my girlfriend's drink was watered down (I tasted it too) and we complained. The first things the waitress says back was, "I saw him [the bartender] make it." She should of asked how she could correct it or offer a new drink! Instead we had to suck it up. I doubt I'll go back after that. Too much of the usual crowd goes here for anyone else to feel comfortable. —DamianKumor

2010-10-09 15:47:19   Nice for an early drink. I say early because this place gets pretty busy. Bartender on Saturday afternoon is super nice. Great beer selection. —NewtonNola

2010-11-14 17:07:19   Went here last night after the RIT hockey game. The food was okay, but they don't have a clue how to serve anything not coming from a tab. It was $2 well drinks so I had a whiskey sour and my gf had her amaretto sour. Both drinks didn't taste like alcohol and mine was it was like drinking lemon juice since it must of been 2/3 sour mix. Seriously they should just stop trying there and go beer only like Tap and Mallet. Also the server was a moron, or more likely it was her first day on the job since she was getting instruction on how to enter orders into the system. —DamianKumor

2012-01-31 15:29:06   A week ago, I left a book at the bar. Yesterday, I asked if the book might be behind the bar. Lo and behold, the bar staff had reserved my property for me. They could have swiped it (though I doubt many are interested in a full-on history of secularism in America) or simply thrown it out. Nope. There it was. Such a thing speaks volumes about the quality of a joint if you ask me. (Aside from this story, Quimby's is my hands-down favorite.) —AaronBPryor