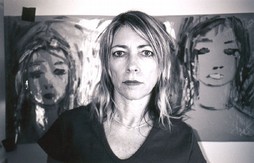 The rock musician and painter Kim Gordon with her artwork.

Kim Gordon was born in Rochester and raised in Los Angeles. She plays bass guitar and guitar, sings, and writes in the rock band

Sonic Youth, which was formed in 1981. She also plays in the band Free Kitten. In 1989 she teamed up with Sadie May and Lydia Lunch to form the band Harry Crews. She credits Rochestarian Del Rivers, a hometown friend, as an early influence.

In 1984 she married fellow Sonic Youth member Thurston Moore. They have a daughter together, Coco Hayley Gordon Moore. Kim is a well established painter. In 2005, she starred in Gus Van Sant's film