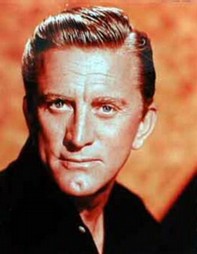 Kirk Douglas (December 9, 1916-) is an American actor and film producer known for his oft-imitated and parodied gravel ridden voice and his recurring roles as misfit characters. He was born Issur Danielovitch Demsky in Amsterdam, New York to Herschel Danielovitch and Bryna Sanglel, poor Belarusian Jewish parents.

The Bad and the Beautiful, and

Lust for Life (as Vincent Van Gogh). Douglas did not win any Oscars, but was awarded a special Oscar in 1996 for "Fifty years as a moral and creative force in the motion picture community."

According to Visit Rochester Douglas worked in a steel mill in Rochester in the 1930's, presumably making him a noteworthy resident.