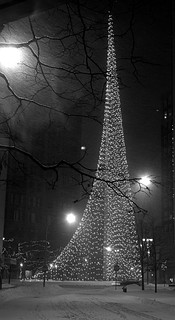 The current pole is the third liberty pole to have graced our city; designed by local architect James H. Johnson, it was erected in 1965. The original was built in 1846, constructed from wood, and eventually toppled. A similar fate met its successor which was destroyed by a storm the day after Christmas in 1889.

Each year around Christmas, the Liberty Pole is strung with lights and lit up at night.

TheLibertyPole.com for detailed history and photos. 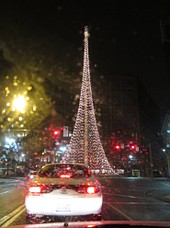 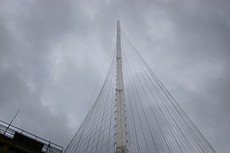 The Liberty Pole This site has become a popular location for organized protest in our city, due to its symbolic significance. In many ways this serves as a disadvantage to protestors, as it allows them to be more easily pushed from relevant protest areas to this statue1.