East Main Street, as the name implies, is the eastern part of Main Street in Rochester.

East Main Street then crosses the Genesee River. From here to the Liberty Pole, this section falls in the Convention and Midtown Districts. Here, East Main is highly developed and fronted with many multi-storied buildings, although the Main St. East/North Clinton Avenue Retail District remains a source of blight. North Clinton Avenue is an important intersection.

Eastward from the Liberty Pole, East Main Street forms the border between the East End and Grove Place. Here it is faced by lower buildings of one to six stories until it crosses over the Inner Loop expressway, which is popularly considered the boundary of Rochester's downtown. Moving east from there to Alexander Street is the Alexander Neighborhood, similar in character to the East End. Here, East Main is a small commercial district of restaurants and auto services.

Important intersections here are East Avenue, Chestnut Street, Gibbs Street (where the Eastman School of Music is located), Scio Street, the Inner Loop, and University Avenue. The Eastman Theater backs up to this part of Main.

Crossing Alexander Street East Main becomes the boundary between Marketview Heights to the north and the Neighborhood of the Arts to the south. It passes over a high railroad bridge and intersects with North Goodman Street. Another important intersection is Prince Street. 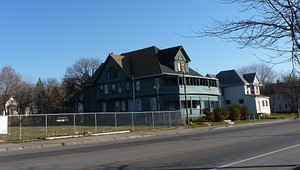 Once past North Goodman, East Main then continues east to Culver Road, past a mixture of light industrial, service, and residential buildings. This is the Beechwood neighborhood and its sub-section EAMMA. Unfortunately, this is easily the worst part of East Main. It is lined with many dilapidated and abandoned buildings and is overall something of a city eyesore. As far as safety goes, however, it is generally fine during the day and well-traveled.

East Main quickly cleans up once it crosses Culver Road and enters the popular Culver-Merchants and North Winton Village neighborhoods (they overlap). The defining feature of this intersection is East High School, which supports a few fast-food restaurants in the area. Continuing the east, Main Street runs past residences, storefronts, and former residential properties converted to office space. A sprinkling of dozen-unit apartment buildings dot this section of East Main Street, as well as several restaurants and bars.

East Main Street ends at North Winton Road, amid a cluster of commercial and residential buildings, including a minor shopping plaza, services, and a few nicer eateries.