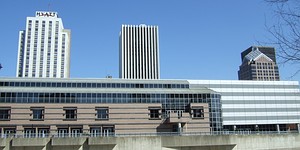 Along the Genesee River - BradMandell 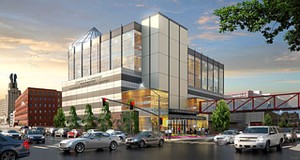 The Joseph A. Floreano Rochester Riverside Convention Center is the city's primary meeting place. It is located downtown on the east side of the Genesee River on East Main Street. It is within walking distance of three major hotels and is reachable by the downtown Skyway system. The immediate area surrounding it is known as the Convention District.

It was built in 1980 on the site of the Commerce Building.

The Convention Center can host events from 10 people to 1000, and offers an extensive kitchen facility for catering. Throughout the year it is the home for regional conventions, trade shows, gala civic dinners, weddings, and smaller many meetings.