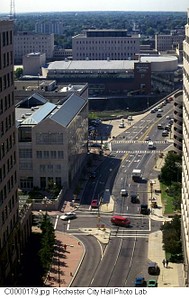 Broad Street is a main thoroughfare of downtown and part of the west side of Rochester. It runs nominally east-west from the Inner Loop near Court Street to West Main Street, then nominally northwest-southeast between West Main Street and Lyell Avenue. It is divided between East and West Broad Street by Exchange Boulevard in the Four Corners neighborhood. The West portion is much bigger and is marked as part of Route 31.

In 1921, with the canal having relocated south some 15 years earlier, it was decided that a light rail system be located in the former canal bed. With this decision came an opportunity to construct a new bridge over the Genesee River to ease the load of the Court and Main Street Bridges. The former Erie Canal Aqueduct was incorporated into the subterranean portion of the new "Subway", and the roof of the new subway bridge became the Broad Street Bridge, and Broad Street was extended from West Main Street to Court Street.

The following are located along Broad but do not have a Broad Street address.

Once across the Loop, West Broad Street resumes on a northward trajectory through the Susan B. Anthony Neighborhood. Here you will find an entrance to the abandoned subway near Industrial Street. West Broad also crosses railroad tracks. Once over 490 it forms the border between the northwestern neighborhoods of Brown Square and JOSANA. This area is considered part of the Crescent of Poverty, unfortunately.

This portion of West Broad Street is a mix of light industry, some commercial buildings, and a few residences. Sahlen's Stadium, located at 400 Oak Street, backs up to West Broad and is considered an important part of JOSANA.