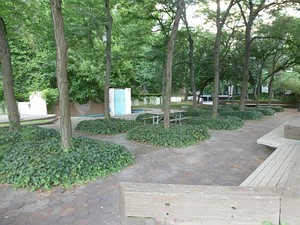 Cornerstone Park is a small park in the Convention District downtown.

The park perimeter consists of a series of raised planting beds topped by mature pine and small ornamental trees interspersed with perennial plantings. Users are drawn to the central treed area of the park by hexagonal paver walkways. The focal point of the park is a waterfall and fountain feature whose mechanicals are housed former Rochester Telephone building immediately to the north.1

Cornerstone Park was created in 1977 by the Rochester Telephone Company, who were supposed to be responsible for its maintenance. By the twenty-first century, however, it had fallen into disrepair and disuse. The pavement was uneven and choked with weeds, while the defunct water fountain was barely recognizable. In July 2013 the City of Rochester sent out a

Request for Proposals "for the rehabilitation of Cornerstone Park to provide a pleasant public space for workers in the adjacent businesses, users of the central library and visitors to downtown." The goal is to "make Cornerstone Park an inviting and active public space and a shining example of green infrastructure practices." Most of the $725,000 price tag will come from a state grant.