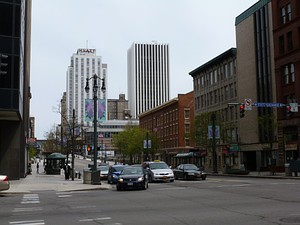 Looking down Main Street, where it divides between West and East, towards the Convention District

Four Corners is a neighborhood in downtown Rochester. Its name derives from the intersection of Main Street, State Street, and Exchange Boulevard. It also includes the block bounded by Main Street, W. Broad Street, Plymouth Avenue, and S. Scott Alley.1 The Four Corners building itself is located at 1 West Main Street.

Four Corners is the seat of Rochester's legal and government action. It also contains most of the government offices for both the city and Monroe County at large, such as the courts, County Clerk, Public Defender, Traffic Violations, and the Rochester Police Department. The architecture dates from the city's boomtown era and is often elaborate and highly detailed. Notable buildings include Powers Building (which contains the New York State Comptroller's Office), the Ellwanger & Barry Building, the Reynolds Arcade, the Terminal Building, and First Federal Plaza. Also check out the City Hall Historic District, and the State Street Historic District.

Aqueduct Park is a popular spot for Four Corners' many employees to eat lunch.

The intersection at Main Street where State Street approaches from the north and becomes Exchange Street has been a prominent location through out Rochester's history. It was located where the first two streets in the settlement crossed, then called Buffalo Street. (Main Street) and Carroll Street (State Street) . That intersection is still commonly called by its original name, The Four Corners. 2 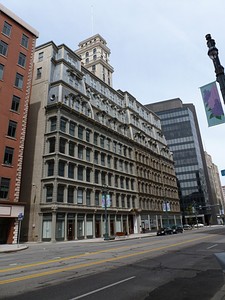