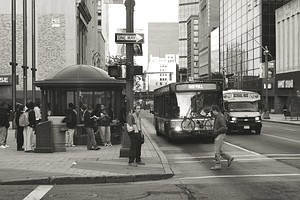 Looking west down Main Street at 7:30AM Monday morning. Photo by

Main Street refers to what was historically the primary thoroughfare of the City of Rochester. 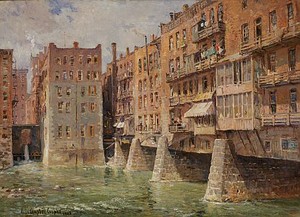 Painting of the Main Street Bridge from the Memorial Art Gallery.

Every city ought to have a Main Street. Rochester is no different.

The only difference is that Rochester's modern Main Street was not called "Main" since forever when carts first trudged along it.

Rochester's first Main Street was the section between the Genesee River and the Liberty Pole, now part of East Main Street. At that time, Main Street continued off to the southeast, along present-day East Avenue, and after one entered the woods, it was known as the "Pittsford Road" because it led to the village of Pittsford, now a suburb of Rochester. To the west of the bridge across the river, the road was called Buffalo Street.

Buffalo Street was laid out by Nathaniel Rochester from the bridge to the Bull's Head Tavern, at the intersection of the Genesee road which led to Batavia and the Buffalo road which led to... you get the picture. The extension of Buffalo Street west of Bulls Head was named West Avenue in the 1830's, and in a fit of feverish intercity competition in the 1870's, the section of roadway from the river to the Erie Canal landing (now at the juncture with Broad Street) was renamed "West Main Street," to disassociate it from Rochester's western rival. In 1913, the name "West Main" was applied to the rest of the road on towards Bulls Head where today Genesee Street joins West Main Street, Chili Avenue, and West Avenue.

Along West Main Street, near Broad Street, the site of today's Rochester Board Of Education building, once accommodated the old General Hospital, which replaced the City Hospital built in 1864 to treat Civil War casualties. The Bulls Head Tavern site was replaced with the St. Mary's Orphan Asylum For Boys, and now is a parking lot. Closer to downtown, the Powers Building at Four Corners was nicely renovated in the 1990's, preserving an early cast-iron structure which once housed one of America's largest private art galleries.

East Main Street crosses the Genesee River at the surprisingly-named Main Street Bridge, which is the fifth bridge to stand on the site. Until the 1960's, this bridge was lined with four-story buildings which blocked downtown's best views of the river, but also lent the city a unique charm on their own, with shops like the Paris Cash Store with "all kinds of Yankee goods and notions" and the I. B. Van Every store which sold "cassimers, beaver and pilot cloths, satinets, flannels, Merinos, bombazines," all, as their advertisement says, "for cash."

The original "Main Street" ran along the course of today's East Avenue, until the 1850's. At that time, Main Street Extension was opened up from the Liberty Pole to Goodman Street, along the present route of East Main Street. This prompted a resident of the "old" Main Street, a Mr. Josiah Bissell, to paint and mount a string of street signs identifying the road as "East Avenue," which name it has retained today, even out to the village limits of Pittsford.

Thus, the Main Street Extension became East Main Street proper, running out to the railyards where North Goodman Street met Schanck Road, which led off to the east. In the 1880's, Schanck Road was absorbed by Main Street, which extended East Main all the way to Culver Road. In the early 1910's, East Main Street was extended one final time, to its present terminus at Winton Road North.


2021-08-02 18:33:07   Does anyone remember when they finished putting the current french metro style bus shelters and vintage look lights downtown and shut down main street for a festival called "the main event"? they did it for a few years after, and then it spun off into the teddy t basketball tourney that was moved elswhere in town. I dont remember what year that was. —MatthewClarkDarby