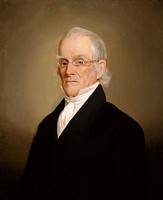 by John James Audubon Our very own Jebediah Springfield.

Colonel Nathaniel Rochester was born in Westmoreland, Virginia on February 21, 1752, but raised in North Carolina. He was a business man and slave owner in Hagerstown, Maryland from 1783 to 1810. He first visited Genesee Country in about 1800. In 1810 he moved from Hagerstown to Dansville, New York, and in 1818 to Rochesterville. He died in Rochester, New York on May 17, 1831, and is buried in Mt. Hope Cemetery.

The City of Frederick Douglass: Rochester's African-American People and Places, written by Eugene E. Du Bois, states that, "When Colonel Nathaniel Rochester traveled north to settle in New York State, he brought along his slaves from Maryland. Settling first Dansville, New York, he manumitted his slaves, and these African-Americans moved with him in 1818 to what became Rochesterville."

Hilariously, Nathaniel was also instrumental in the development of Dansville, a town founded by Captain Dan Faulkner. One wonders if the two were at odds.

Nathaniel Rochester Hall, a dormitory at the Rochester Institute of Technology, was named in his honor.

In May 2008, sculptor Pepsy Kettavong unveiled a statue of Nathaniel at Nathaniel Square at the corner of South Avenue and Alexander Street. A giant mural of Nathaniel can also be found at Founders Café.