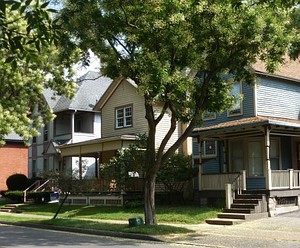 Homes along the South Wedge portion.

Rochester is designed in a series of circules and spokes. Alexander Street links three of the major Spokes (East Avenue, University Avenue, and Monroe Avenue), and one minor spoke (Park Avenue) together just before they enter downtown. As a result, Alexander Street is the major connector of several of Rochester's hottest neighborhoods. Beginning at Mount Hope Avenue, traveling north along Alexander gets you to the South Wedge, Pearl-Meigs-Monroe, Monroe Village, Monroe/Alexander, Park Avenue, the East End, the East Avenue Historic District, the Neighborhood of the Arts, and an attractive pocket of South Marketview Heights. Alexander can arguably be called the Main Street of Rochester's Southeast Quadrant. Only one or two blocks outside of the Inner Loop, it's also the closest "mid-urban" area to the city center.

Alexander is subsequently an eclectic mix of bars, restaurants, apartments, and professional offices. Architecturally, it contains many beautiful Victorian homes - some still residential, others converted to offices or commercial use - along with some large apartment buildings and new construction. Once past East Main Street, however, it becomes entirely residential.

Alexander Park is currently under development by Buckingham Properties 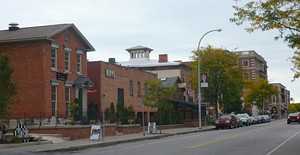 View of the East End/Alexander Neighborhood. 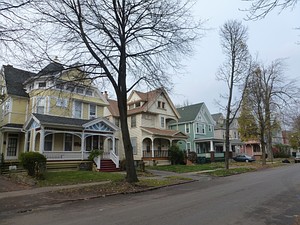 City Grill Rochester is on the corner of Alexander Street and East Avenue.

The Eastman Dental Dispensary is on the corner of Alexander and East Main in Marketview Heights.