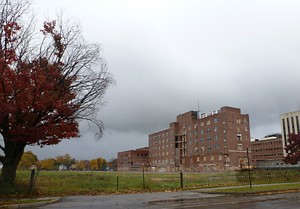 The undeveloped Alexander/Tracy portion, as it appears in November 2013.

Alexander Park or Alex Park is the redevelopment site of the old Genesee Hospital, located near the corner of Monroe Avenue and Alexander Street in the Alexander Neighborhood.

The parking garage and three office buildings will stay and be renovated. MVP Health Care (formerly Preferred Care) moved their corporate headquarters from the Monroe Square building to one of the renovated buildings at 220 Alexander Street. The remaining parts of the seven-acre site will be used for future development. Office space on the corner of Monroe and Alexander was completed in 2011, with EarthLink now occupying the top floors. There is an attached parking garage.

A mix of residential and retail is planned for the larger, northern part of the property along Alexander and Tracy Streets. Demolition of buildings not in the plan has started, including the building that housed the Raj Mahal restaurant.

The land is now owned and the project is headed by Buckingham Properties, whose previous projects include the renovation of the old Artcraft Optical building on Allen Street downtown, which is now Buckingham Commons.

In November 2013 Governor Cuomo announced that the