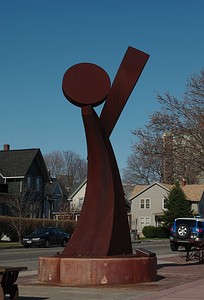 Sculpture in the Neighborhood of the Arts, University Ave, 4-2009

University Avenue is an east-west route in the City of Rochester divided into two disconnected segments by the Inner Loop. It has access to and from Interstate 490 on the east.

The names of both University Avenue and nearby College Avenue derive from the historical presence of the University of Rochester, whose original location, known as the Prince Street Campus, was at University Avenue and Prince Street. Founded in 1850 as an all-male institution, UR began accepting female students in 1900, thanks to the indefatigable efforts of Susan B. Anthony. Rush Rhees, UR's president at the time, had always favored separate colleges for men and women, however, and he was finally granted his wish when the River Campus was built in 1930 and the male students were moved there.

The women stayed behind on the Prince Street Campus for the next twenty-five years until it was decided that the redundant costs of running coordinate colleges had proven too much. The Prince Street Campus finally closed for good in 1955 when the female students joined their male counterparts on the River Campus and most of the Prince Street Campus's buildings were sold off. Today, only the Memorial Art Gallery and Cutler Union remain in University of Rochester hands. They attached via an enclosed sculpture garden that was added in 1968. The former Anderson Hall - named for Martin B. Anderson, UR's first president - is now the headquarters of the Rochester chapter of the Red Cross.

The Memorial Art Gallery, widely regarded as one of the finest regional art museums in the country, was enormously influential in the development of the Neighborhood of the Arts beginning in the late 1990s. Its presence is a strong, stable anchor for the local arts community and has led to the growth of other artistic destinations in the surrounding area, such as the School of the Arts, the Anderson Arts Building, the Village Gate, the Hungerford Building (in nearby Beechwood), and more.

Traveling east, University Avenue passes through the downtown neighborhood of Grove Place, while the small portion between Scio Street and the Inner Loop is considered part of the East End. University Avenue then cuts off at the Loop but resumes in Monroe/Alexander. From Alexander Street to Culver it forms the north-south border between the Neighborhood of the Arts and Culver/University/East.

University Avenue is primarily a commercial road, although the NOTA/historic district portion does have a long row of beautiful Victorian houses, some of which are still single-family homes while others have been subdivided into nice apartments. East of Elton Street is an old industrial area that has been transformed into a fitness hotspot offering a variety of gyms, indoor sports, and boutique health clubs.1

Grove Place and the East End

East Avenue and University run parallel until the easternmost tip of University turns right and terminates at East. Also intersects with Blossom Road. This part also has access to Interstate 490.