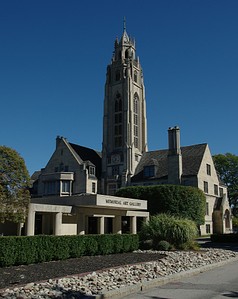 Cutler Union is a historic building that is part of the Memorial Art Gallery. It started life as the student union for the University of Rochester College for Women. The male students had recently (1930) been moved to the new River Campus, where they had Todd Union. The construction of Cutler Union was part of an overall plan to expand the Prince Street facilities in order to accommodate a growing student body.

The Gothic building, made with Indiana limestone, is often mistaken for an old church. It was named for James G. Cutler, whose bequest paid for the construction. When it opened in 1933, Cutler Union is described as follows:

Inside, a spacious auditorium seating 800 was equipped with a large stage, and, by removing the chairs, the hall could be transformed into a dance floor or used for banquets. Ceiling panels in red bore symbols of the fine arts, the lyre, for instance, representing music, while snowflakes spotted blue panels. Sidewalls carried the coat of arms of the Cutler family and "Meliora" and curtains were decorated with dandelion motifs. A splendid, paneled lounge with a portrait of Cutler over the fireplace contained a plaque explaining that

This Student Union of the College for Women gratefully commemorates James Gould Cutler and Anna Katharine Cutler of whose large visions for higher education of women at Rochester it is a partial realization.

Small meeting and reception rooms occupied the balance of the first level; on the floor above, areas were set aside for various undergraduate activities, while a cafeteria, adjoining dining alcoves, and cloakrooms were laid out in the basement. Before long, a chapel was laid out on the third floor and assigned the name of Kay Duffield in appreciation of a religious worker at the college. Counting furnishings and equipment, the Union cost slightly in excess of $500,000, and it proved to be one of the most potent arguments against recurrent proposals to move the women undergraduates to the River Campus.

Ruth Merrill of Radcliffe was recruited as the director, making her the first female director of a university student union in the United States. The union was beloved by several generations of female alumni, even inspiring popular English professor John Slater to compose "Tower Song":

Where the light sings all day long,

Sweetest when the day is going

We forget the words, but never,

In 1955, however, the female students were moved to the River Campus and the Prince Street Campus closed for good. Cutler Union was subsequently given to the Eastman School of Music. In 1968 local architectural firm Waasdorp, Northrup and Kaelber were commissioned to build an International Modern-style addition that connected Cutler Union to the MAG's main building. Today it used primarily as classroom space. Both the Memorial Art Gallery and Cutler Union are the only two remnants of the original Prince Street Campus that are still part of the University of Rochester.


2020-04-20 14:05:45   The Cutler Union is not primarily used as classroom space.Creative Workshop does occupy most of the lower level. Administrative offices occupy most of the upper level office space. The ballroom is rented out for wedding receptions and corporate events. —SherrilGoslar