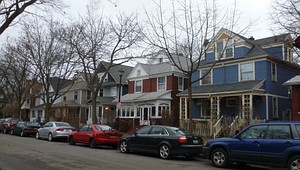 Pearl-Meigs-Monroe is a city neighborhood consisting of a large portion of Monroe Village and its nearby residential streets. Its name derives from Pearl Street, Meigs Street, and Monroe Avenue.

Although the Park Ave area is only a short walk away, real estate is much cheaper in Pearl-Meigs-Monroe, though generally less high-end. Over 80% of its residents are renters. Still, it is a decent area and the people are very dedicated to where they live.

Over the past few years some residents have pushed to be known more as the Garden District rather than Pearl-Meigs-Monroe. Their desire is to redefine the neighborhood's image and give it a more distinct character. To this end they are encouraging more neighborhood pride through gardens, social events and neighbor unity.