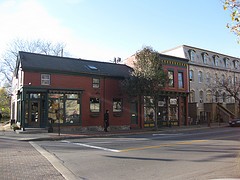 Nathaniel Square Corner Store is a convenience store with over 200 beers along with four draft-beer lines. It is located on South Avenue.

stated philosophy is as follows: "We believe in Rochester. We believe in our great little neighborhood and all of our neighbors in the South Wedge. We believe in having a huge variety of craft beer from around the country and the world and keeping most of it cold. We like fresh, we like local, we like American made. Come down and see us, our staff can help you pick out some great brews to take home with you. Locally owned, locally minded, always here to serve you."


2009-05-22 10:27:25   New neighborhood corner grocery opened in the Wedge by the owner of John's Tex Mex. Stock is a little sparse at the moment but I presume it will be expanded. Liquor license is pending but they eventually will feature craft beers. —jjjingleheimer

2011-05-05 07:48:04   This place is pretty great. We got tofu scrambles a while ago and it was really good. Also, Vegan Wednesday rocks! We just got dinner from here yesterday, a buffalo seitan sandwich and a seitan philly. It was awesome! We couldn't believe that we had that sort of dinner in Rochester of all places! —BrianHahn

2012-10-07 19:17:18   Probably the best corner store I've had. Wish their sandwich service stayed open, though. They would've been a nice complement to the newly-open Harry G's. —bammerburn

2016-10-12 16:17:16   I never knew anything about this place - always thought it was just a dive corner store. Went in there a couple of months back and it's great! They had a great beer tasting going on. Really cool place. —DE