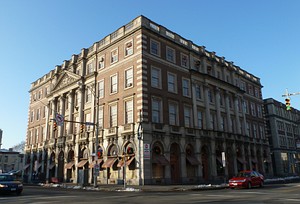 The Hiram Sibley Building was built in 1925 by Hiram Watson Sibley in memory of his father Hiram Sibley. Its design was based on Christopher Wren's wing of Hampton Court, England.

Today, the neighborhood is known as the popular entertainment district Upper East End. Like most buildings here, the Hiram Sibley offers office space during the daytime, while the ground floor is reserved for bars and clubs that come alive after dark.

In 2015 DHD Ventures announced they were converting the office space in the building into 21 apartments.

Note that some tenant addresses may be listed as 355-365 East Avenue, as the building is on the corner of East and Alexander.

Not to be confused with either The Sibley Building or the Sibley Triangle Building, both also located downtown.