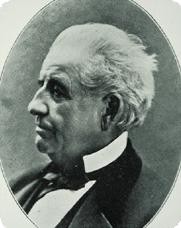 Hiram Sibley was born in North Adams, Massachusetts on February 6 of 1807 to parents Benjamin and Zilpha Sibley. He was one of thirteen children of which three were girls and twelve were boys. While in Massachusetts, the young Sibley with no real formal education sought out to find work and with only his gift for mechanical ability he gave a demonstration of what he could achieve to a local shoemaker who quickly hired Hiram as an apprentice. A few years later in 1829, at the age of sixteen and after learning much more, he came to Western New York and settled in Livingston County where he would quickly master five trades in as many years.

After growing in machining and blueprinting he felt secure enough to move on to own his own shop and so he moved to Sibleyville in the town of Mendon and along with new partner Don Watson they started a sawmill which produced enough for them to open a machine shop and eventually a foundry with the first working blast furnace in America. The businesses grew and became successful and Sibley began to become popular locally and with the increase of reputation and success he eventually started looking at public offices.

A few years later, at the age of 36, he was elected Sheriff of Monroe County. This brought him to Rochester, NY where his life started to slow a little and he became bored so he started looking for something new. Just at the right time he heard about two scientists named Alfred Vail and Samuel Morse whose work in something called the telegraph peaked his interest so much so that he gave up office for now and went with Morse and

Ezra Cornell to promote the telegraphs growth and ask for money from Congress to build a telegraph line from Washington to Baltimore.

Initially the meeting with Congress was shaky as Morse tried to oversell the project beyond realistic measurements:

"We had made up our minds to allow the appropriation, when the Professor came in and upset everything. Why! he undertook to tell us that he could send ten words from Washington to Baltimore in two minutes. Good heavens! Twenty minutes is quick enough, but two minutes is nonsense. The Professor is too radical and visionary, and I doubt if the committee recommend the sum to be risked in such a manner."

Morse was quickly quieted and the grant was approved and the Pioneer Line was born.

This new telegraph line made headlines and shortly after new independent companies started to crop up, so many in fact that many of them had problems making money. Sibley, on top of his game and with the same foresight that got him into the telegraph game partnered up and bought out a bunch of these independent telegraphs and convinced the others to merge and pull together all of their patents. The new company, as suggested by Ezra Cornell, was called The Western Union Telegraph Company, of which Sibley was the first acting president.

During the first sixteen years at Western Union Sibley grew the company to four thousand offices and the company was valued at almost fifty million dollars. From this growth Western Union had the strength to move out and really innovate. They introduced the first stock ticker, a standardized time service, money transfer service and most notably they ran the Atlantic-Pacific line (1861).

Moving away from success and good timing, Sibley became interested in a project to link Russia to Alaska with telegraph wire via the Bearing Straits. After about 3 million in investments the project was shelved because of the successful installation of the Atlantic Cable. However during the push Sibley visited Russia in 1865 and was greeted the Czar and so impressed that had not the Atlantic Cable been completed, Sibley’s Russian-American Telegraph link would have no doubt been completed.

After leaving Western Union he moved from the Telegraph business into other areas of industry. He bought and sold railroads, manufactured salt and ran lumber mills in both Rochester and Massachusetts. He also got into farming, seeds and farm supply. In the plant business he excelled in the market when he engineered seeds that were stronger and developed plants that had greater seed bearing qualities, with seed sales becoming his main business.

He purchased what otherwise was worthless land and turned it into farmable land. One such example is Howland Island, which compromised of 3500 acres of land that he purchased cheaply. After backfilling the land it became invaluable due to its proximity to the Erie Canal and the New York Central Railroad. At one point they produced seed, grain and herded 500 head of cattle there. Another example is Fox Ridge farm that was six hundred acres of swam land which he backfilled and used profitably, much to his delight. It didn’t hurt that the NY Central Railroad also passed through it as well. In total he owned fourteen large farms in NY and Massachusetts.

Other accomplishments include being president and largest stockholder in the Bank of Monroe in Rochester, NY. He, made several large donations such as founding the Sibley Library at the UR Eastman School of Music and building the Sibley College of Mechanics at Cornell University. The Hiram Sibley Building is named after Hiram but was built by his son, Hiram Watson Sibley in his father's honor.

Sibley was at one point the richest man in Monroe County.

His wife was Elizabeth M. Tinker Sibley, also of Massachusetts. Their children were Zilpha Louise (after Hiram’s mother), Hiram Watson Sibley and Emily. Not sure of 4th child. He and his partner named their sons middle names after each other: James Sibley Watson and Hiram Watson Sibley.


2014-01-04 17:00:39   I believe he was one of fifteen children. His daughter Zilpha Louise would have been named for both grandmothers, as both Hiram and Elizabeth's mothers were named Zilpha. A fourth child was born after Zilpha Louise and before Hiram Sibley. His name was Giles Benjamin and he died when he was about two years old. There is a Tiffany memorial window dedicated to him in the chapel of the Episcopal Church Home. —MarjorieSearl